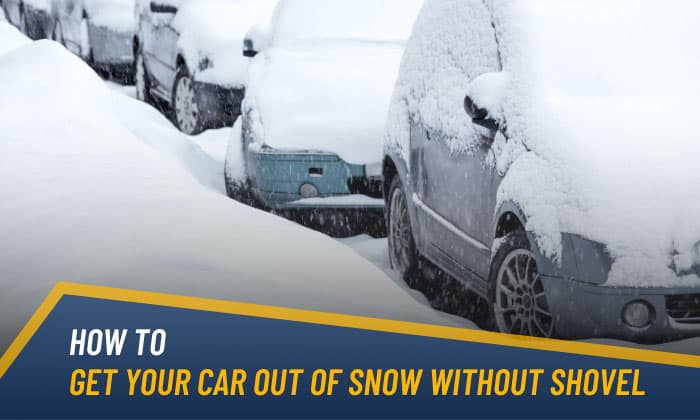 Getting snowed in and having your car stuck on ice in driveway or suddenly not being able to accelerate when you were out driving or parked amidst the snow are some problems that usually happen in winter. That’s why it’s important to have a shovel at home and/or in your car’s trunk during winter.

But don’t fret if you were caught unprepared without a shovel, as this article will show you how to get your car out of snow without shovel. You can use some things you already have at home or if you’re lucky, you can buy at a nearby store when you get stuck somewhere.

And with a little patience, you can get a car unstuck by yourself. But in worst-case scenarios, you’d need to get help from someone.

Ways to Get Your Car Out of Snow Without Shovel 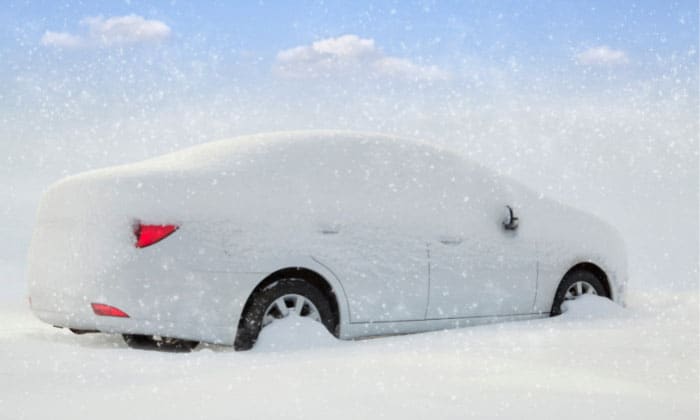 In a nutshell, there are four main steps that you can do to get your car out of the snow without a shovel, which are:

Step 1: Clear the Path Around the Tires

If you got stuck in your driveway and don’t have a shovel to get snow from under car, you’re at least fortunate enough to have a broom, rake, or leaf blower at your disposal. Or you may also melt the snow on the path and get ice off of tires with simple tools as follows:

You most likely have a broom you can use to get rid of snow without a shovel. But it’d also be a good idea to invest in a push broom, which allows sweeping large areas and can make the task easier with its wide brush attached perpendicularly to a long handle. 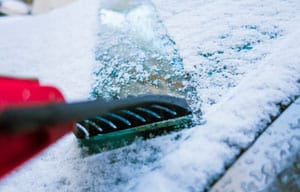 A rake may also be used to get car out of snow. It works well on thick snow, but since its teeth are far apart, it may leave behind some snow that still has to be swept with a broom or blown away with a leaf blower. 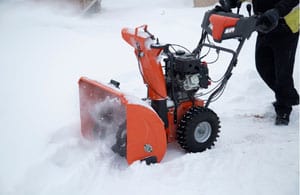 Not only can a leaf blower be used to blow away leaves but also to move snow without a shovel. It can tackle up to one to four inches of snow. It’d be best to use a high-power, cordless, battery-operated one that has a long-lasting battery life. 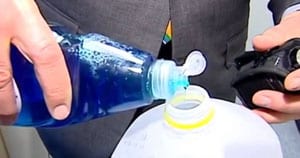 To create your homemade snow-melting solution, combine a gallon of hot water, half a cup of alcohol, and a teaspoon of dish soap. This mixture can clear away snow and ice while preventing refreezing.

Rock salt would also work. It may not be as effective and as quick as a snow melt, but it does help melt the snow.

You have to be careful when using it, as it’s also corrosive to cars. 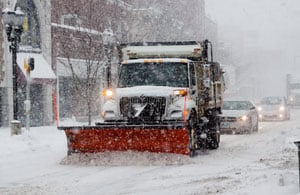 It’s recommendable to go for a magnesium chloride snow melt, as it’s very effective but doesn’t have any adverse effects on the environment and your driveway, and it’s also safe for animals.

However, since it’s salt, it can still cause corrosion to a car’s body and tires if it’s not used cautiously. So always be careful when using it. 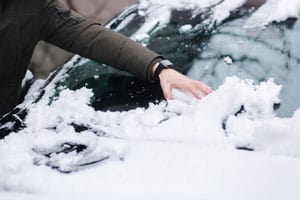 When you’re stuck somewhere without any tools or you don’t have anything at home to dig the snow out, you can try using your hands to dig car out of snow without shovel.

You can also roll the snow away like how you would roll the snow into balls to make a snowman. But you don’t have to form them into a circle, just roll them aside like a log.

Step 2: Turn off the Traction Control

You can find the traction control button on the dashboard or console. Then push it down for a couple of seconds to turn the feature off.

Step 3: Set the Car to the Lowest Gear

The best way to get out of deep snow is to set your car to the lowest gear and move slowly. It’d allow your tires to get more power and traction as you try to drive off.

Avoid driving in a rush to escape, as it’d only push your car deeper.

Step 4: Use Techniques to Get Out of the Snow

Below are several techniques to get your car unstuck from the snow. In some severe cases, you might need to use a combination of these techniques, but with some perseverance and patience, you’ll be able to get out.

01 Putting an Aggregate by the Tires

You may find your car’s tires spinning in snow even if your car is unable to move. That’s because there’s barely any traction or grip in the slippery snow for the tires to advance.

You can add some traction in snow by throwing some aggregate by the tires, such as kitty litter or sand. 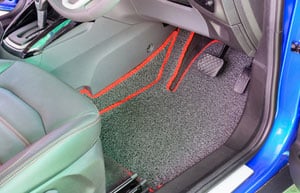 You can also try using car mats to get out of snow. They can also be a means of improving traction that is always at your disposal in your car, especially rubber mats. Still, the rubber side of fabric mats also works. 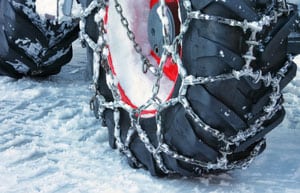 Another thing that can provide traction to tires is snow chains. Just make sure to use the right kind of snow chain for your car and put it on the right wheel (drive wheel) by checking in the car owner’s manual or searching online.

Moreover, the designs of snow chains vary, so refer to the instructions on how to install yours on your tire.

This method works on cars with front drive wheels. Repeatedly turn the front wheels to the left and right alternatively as you slowly step on the accelerator.

Eventually, your tires will get in contact with an area with more traction. Once the tires hit a good spot, it’d help your car get on the move.

05 Repeatedly Moving the Car Back and Forth

You will gain momentum as you repeat the backward and forward movements and eventually make your escape. However, if your car is still stuck after five minutes, don’t do it further, as too much shifting may cause damage to the car’s transmission. 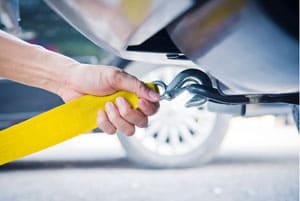 In the worst case of a high-centered car, meaning there’s too much snow underneath it in between the tires, trying a combination of methods may help. But if you’re not making much progress, you can ask someone to help you get a high centered vehicle unstuck with a tow strap they can attach to your car and drag it out of the snow.

This should only be done as a last resort, as it can be damaging for your tires and it’s also dangerous to be driving with deflated tires especially if you don’t have any means for refilling the tires, such as a tire pump or tire refilling station nearby.

This method lets the tires get more contact on the road and improved traction. Just don’t deflate the tires too much but just enough to make them appear a bit lower and feel a bit soft, so their surface can be pushed down a bit.

To deflate a tire, find its air valve, a small, protruding tube. Remove the valve’s cap, and gently push the pin at the center.

Tips to Prepare Before It Snows 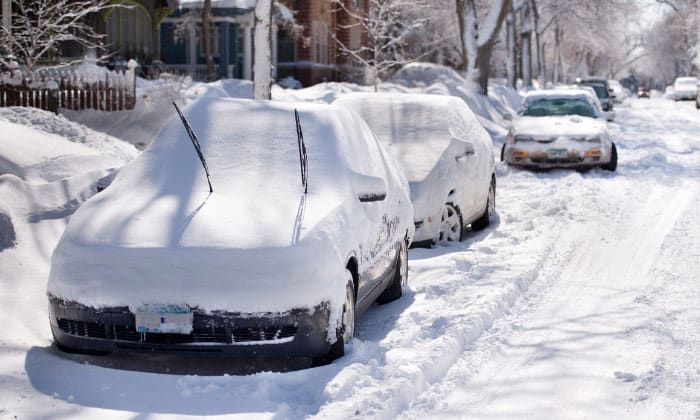 1. Make Sure Your Tires are in Good Condition

Ensure that the tires don’t have deep, widespread cracks and have adequate tire pressure and tread for safe and optimum winter driving.

The adequate tire pressure for your car can usually be found in the car owner’s manual or online. For the tire tread, experts recommend a depth of 3 mm to get optimum tire grip and control on winter roads.

You can check the tread depth of your tires yourself by using a tire tread depth gauge or doing the “penny test”, which involves placing the penny on the tread groove.

If Lincoln’s head on the penny is not visible, your tires’ tread depth is fine, but if you can still see his entire head, your tires are worn and need replacements.

If your tires are worn out anyway (or even if they’re not), it’d be a good idea to get snow tires instead. They have the advantages of better grip, lesser stopping distance, and better turn handling, making for better performance and safer drives in the snow with less chance of getting stuck.

It’d help to keep some things that can get a car out of snow when stuck in your trunk in case of emergency such as kitty litter or sand, snow melt, snow chains, shovel, and tow strap.

There’s no need to panic when your car got stuck in the snow, as there are plenty of ways on how to get your car out of snow without shovel. If you try all the steps above, it’s possible to get back to the road safely.

Now you know that you can shovel snow without a shovel, but it’s better to always be prepared in case of emergency.

How to Remove Snow From Car Without Scratching? (4 Ways)