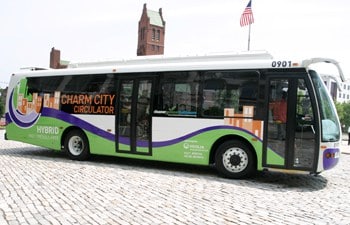 The backbone of any great city is transportation. The Charm City Circulator (CCC), a fleet of 30 free shuttles that travel four routes in the central business district.

We service residents, downtown employees, students and tourists and anyone else who wishes to ride. The shuttle is intended to reduce congestion and greenhouse gas pollution by offering a convenient, reliable and eco-friendly form of public transportation.

We’re not only dedicated to offering a stellar form of public transportation that links critical parts of the city—we are interested in doing it in the cleanest way possible. That’s why we’ve chosen Hybrid Electric vehicles—the first fleet of this type in a major metropolitan area. The Charm City Circulator was also implemented as a part of the City of Baltimore’s initiative of a “cleaner, greener Baltimore.”

We encourage all of our residents and visitors to use this service—not only is it free, it’s efficient. A shuttle arrives every 10 -15 minutes at the designated stops on each route.

Use it as your connector to your regular train, bus or commuter lot—or just to get a taste of all Baltimore City has to offer.