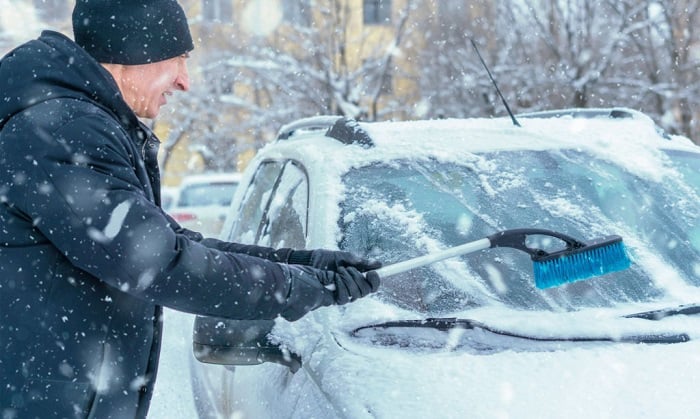 Cleaning snow off a car may seem like such a laborious task, especially in winter. It is quite difficult to clean your car in cold weather. Still, it’s necessary to better your visibility on the road and avoid causing damages to your vehicle and others’. To help make it easier and quicker for you, this article will provide more efficient ways on how to clean snow off your car that will also prevent scratches.

For example, the best way to start is by unclogging the tailpipe and turning on the car’s defroster. We cover every detail of clearing the snow from the roof then to the wheels.

With the tools listed below, you can tackle snow and ice more efficiently, quickly, easily, and without leaving scratch marks on your car. Make sure you have them when you clear away the snow and ice on your car. 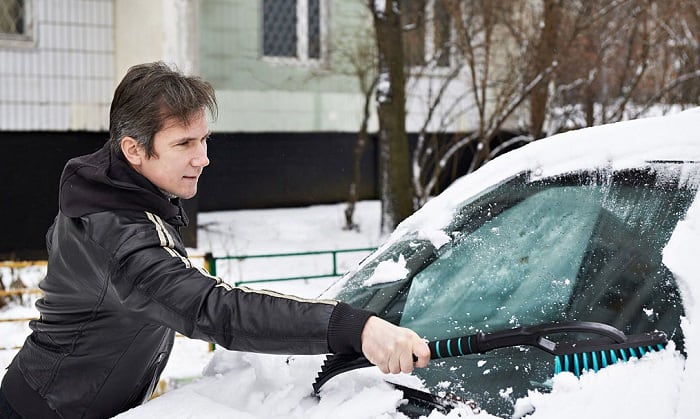 To be able to efficiently and safely remove snow from car, you need to practice the proper ways of doing it. See how it can be properly done below:

Step 1: Check if the Tailpipe Is Clogged by Snow

If there is snow clogging it, you should scoop it out immediately. Because snow build-up in the tailpipe can result in the production and spreading of carbon monoxide into the car interior when the car has been started, leading to carbon monoxide poisoning.

Step 2: Let the Car Run With the Heat and Defrosters on to Melt Some of the Ice

To make cleaning snow off car easier, turn on the car, the heat, and both the defrosters at the front and rear. This step will make the car warm and melt the snow and ice on the car’s surface.

If your car has a remote start, you have the advantage of doing it as you enjoy coffee indoors and wait for the car to melt the snow and ice for you. It would take more or less five minutes for a car to get warm and start melting the snow and ice.

But if your car isn’t equipped with a remote start, you’d have to go to your car. But before getting in, you should clear away the snow on the driver’s side of the roof, to avoid having some slush fall on you when you get out.

Step 3: Clear Away the Snow on the Roof

If there’s only a little snow that would simply require light cleaning, you can quickly and easily get snow off car without scratching it by using a leaf blower just to blow away the snow. Start blowing from the car’s roof going down to the other parts.

But if there’s thick snow, you can clean it off by wiping it away with a snow broom in a manner that you’re pulling the snow away, not pushing it away to avoid scratching the car.

You should swipe on the surface using straight strokes so that in case of any accidental scratch, it won’t be that noticeable. If you have a big vehicle, like an SUV, van, or truck, you can make use of a stepping stool to clean the entire roof.

After you’ve finished clearing the snow off the roof, proceed to the other parts of the car, working your way down. Always start the cleaning on the roof first because if it’s cleaned later, snow would be falling on the areas you already cleaned.

It would also be necessary to clear the hood and trunk of snow before you drive out. It prevents snow from being blown off and obstructing your view or another driver’s view when you drive.

Step 4: Scrape off the Snow From the Glass

When clearing the windows, work on the side windows first, followed by the rear window. Work on the windshield last to allow more time for the defroster to melt more of the ice that built up around it.

When you move on to cleaning the windshield, use the plastic scraper’s ridged side. Make slashes on the ice vertically and break it up by scraping across the window.

Step 5: Clean the Wipers and Its Surrounding Area

But if the windshield wipers are frozen, do not lift them up because they can get destroyed. If they are frozen, chip some of the ice away and just wait for the defroster to melt the rest.

Step 6: Clear Off the Ice and Snow on the Exterior Mirrors and Exterior Lights

You wouldn’t want the snow to impede your visibility. It covers the exterior rear mirrors and the headlights and obstructs other drivers’ view of your taillights and signal lights. So you must not forget to brush the snow off them.

You can actually get pulled over by a cop if your license plate is obstructed. So also don’t forget to brush off the snow on it before you drive.

Step 8: Clear Away Snow Build-up in the Mud Flaps

The mud flaps can also accumulate snow, especially if you’ve been driving amidst slush. So check the mud flaps if there is any build-up of snow and brush it off if there is.

Step 9: Clean off the Snow and Ice Within the Wheels

You can remove the snow from the wheels by scraping them off with the ice scraper. While the ice can be sprayed with de-icer on its edges for it to be melted on the areas where it’s stuck to the tires to help make removing it easier. Afterward, you can pry out the ice with an ice-scraper.

Practicing the proper ways of how to clean snow off your car will not only let you work more efficiently but also prevent scratches on your car. Share this article for a safer road amidst the snow. Also, if you enjoyed this article or have any thoughts, kindly comment below.

How to Use a Foam Cannon to Wash Your Car? – A Detailed Tutorial

How to Clean Your Car With a Pressure Washer? (7 Steps)